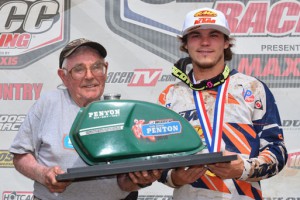 FMF KTM Factory rider Kailub Russell took a dominating win at the eighth round of the GNCC Series to further increase his lead in the championship. His teammate, Kacy Martinez, also secured another win in the WXC class.

Russell earned a 2nd place start when the green flag dropped and quickly passed into the lead. Once out front he began to put a large gap on the field. At the end of the first lap he had already put a minute on the 2nd place rider. Over the remaining five laps he continued to charge forward and pulled almost a two minute gap by the end of the race.

Russell's victory marked his seventh victory this season and allowed him to increase his point lead in the series to an 88 point margin.

"I am really happy with the race result today," remarked Russell. "If I could have written how this race would go, this is very close to how it would have happened."

In the WXC class, Martinez got a great start and got into the lead early. She was able to lead every lap of the race on her way to her seventh win of the season. Now eight rounds into the series, she holds a 15 point lead in the championship standings.