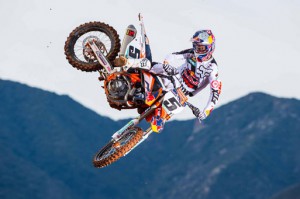 KTM Motorsports is pleased to announce the complete line-up of its Red Bull KTM Factory Racing Team, from both sides of the Atlantic, will be racing at the MXGP finale at Glen Helen Raceway on September 20, 2015.

In addition to both the U.S. and European Red Bull KTM Factory Team competing at this event, KTM will have additional presence with the U.S. satellite teams of BTO Sports KTM and the Troy Lee/Lucas Oil/Red Bull/KTM Teams making it a real celebration for the orange brand.

Pit Beirer, KTM's Motorsport Director, stated, "It is a unique opportunity not only for the KTM teams but also for the best riders in the sport to compete against each other in a top class competition setting."

He continued, "We are going to Glen Helen with all of our factory riders from the MXGP World Championship and the US Motocross Series to bring our own guys together in a truly "Ready to Race" fashion. We want the last round of the season to be memorable and we hope that the other top factory teams from the U.S. will take up the invitation and join us at Glen Helen."

Beirer added that all teams and above all, the sport of motocross, stand to benefit from such a high level of competition in a race format that is different from the traditional Motocross of Nations, where riders meet to fight for their individual national glory.