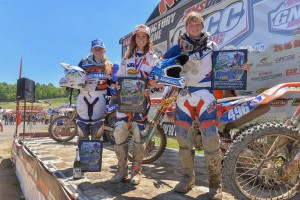 FMF KTM Factory teammates Kailub Russell and Kacy Martinez both took a win in their respective classes at the seventh round of the GNCC Series dubbed the Mountaineer Run.

Martinez got a top five start in the WXC class and quickly moved into the lead. She was holding a good pace out front when she made a mistake in one of the rock sections and lost the lead. She recovered in 4th place approximately a minute and a half down.

In the remaining laps she was able to catch the lead riders and go on to pull a gap on the field. She crossed the finish line to take the win by approximately one minute over the next closest competitor clinching her sixth win of the season. 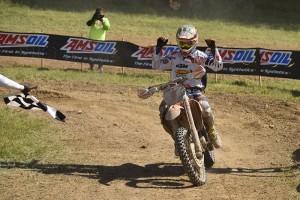 Her teammate, Russell, pulled a massive holeshot at the start of the XC1 Pro class. He led early on until he also made a mistake in a rock section allowing Ryan Sipes to pass. For the next three laps the two riders would exchange the lead multiple times. On the third lap, Russell finally made a pass stick. When the two came into the pit stop Russell had pulled a gap of 26 seconds on Sipes. From then on, Russell continued to pull away and was able to win the race by a margin of 1 minute and 30 seconds at the end of the event.

"I was really happy to get the holeshot today," stated Russell after the race. "I thought I could pull away early on but Sipes kept on me for a while. It was hard with both of us not really knowing the course those first few laps. Once I finally got it down, I was able to pass, pull a gap and take the win."