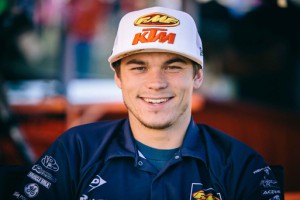 FMF KTM Factory riders Kailub Russell and Russell Bobbitt finished 1st and 2nd respectively at the second round of the Full Gas Sprint Enduro Series after a two-day battle.

The track and weather conditions were near perfect for the riders in attendance at the second round of the dirt bike series. Russell was the strongest rider all week winning most test sections unless he had made a small mistake. Bobbitt also had a strong showing consistently running times inside the top three through both days.

The course consisted of two special test loops. The first was roughly a 5 minute test time while the second was 8 minutes in length. The riders raced each test four times on day one and 3 times each on day two. At the end of the two days, Russell managed to pull off the win by a margin of two minutes and thirteen seconds over Bobbitt.