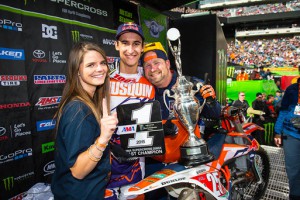 KTM Motorsports is excited to announce it has extended its contract with Red Bull KTM Factory rider and the newly crowned 2015 East 250 Supercross Champion, Marvin Musquin, through the 2017 race season.

Fresh off his first 250 Supercross title, Musquin announced after the race that he had re-signed with the Red Bull KTM Factory Team for two more years. Even more exciting to the masses, is that Musquin will be moving up to racing a KTM 450 SX-F in the 450 Supercross and 450 Motocross Championships starting in 2016.

"I'm really excited to spend the next two years with KTM," stated Musquin. "They are my family. It feels like home under the Red Bull KTM tent as we've spent almost 7 years together already. I know how much effort they have put into R&D to give us the best KTM race bikes and I believe in them just as they believe in me. I'm looking forward to even more success with my team."

"The whole team is happy to have Marvin re-sign with team," commented Red Bull KTM Factory Team Manager Roger De Coster. "Marvin and Ryan (Dungey) have a great working relationship. I have not seen a bond this great between teammates in a long time and we are happy to work with them both. Marvin is a smooth rider with great technique and we feel he will easily adapt to the 450 and we are looking forward to what he can bring to that class."