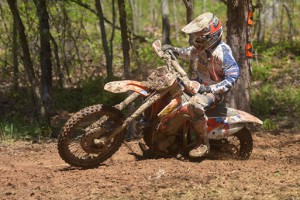 FMF KTM Factory rider Kailub Russell extended his win streak in the 2015 GNCC Series to five-in-a-row on Sunday after capturing another win at the Limestone 100 GNCC in Springville, Indiana.

Rainfall the day before the race made for challenging track conditions, where the course was shortened to only eight miles, with lap times much shorter than usual. Russell got a great jump off the line where he entered the first turn in second place. However, Russell quickly lost his advantage in a collision with another rider's wheel, causing Russell to go down in the second turn and ultimately take off in a dead last position.

Russell worked his way up to fourth after lap one, where he continued to push his way to the front, taking over the lead on lap four. From there, Russell swapped lead positions several times with Thad DuVall at first, and then with Grant Baylor.

"It was a tough day straight from the start," remarked Russell. "The track was slick and a lot worse than I anticipated but it got better and better. It took me a good bit to catch the leaders and see them but it was one of those days you wanted someone in front of you. 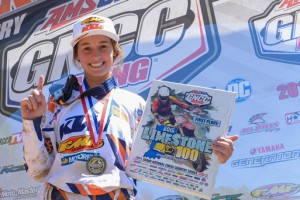 It was really hard to lead because there were so many lines. That last lap I knew I needed to minimize mistakes and ride well, and I was able to do that. But those guys were riding really well."

Russell maintained his composure through the final moments of the nine-lap dirt bike race, ultimately finishing 19 seconds ahead of Baylor for the win. Sunday's victory marks Russell's 27th career win in GNCC, where he now sits third on the all-time wins list.

Russell's teammate, Kacy Martinez, captured her fourth win of the season at round five. Despite challenging track conditions at the beginning of the 10 a.m. race, Martinez fought back from outside the top five to put herself into the lead by lap three.

From there, Martinez got into a rhythm and extended her lead to over two and a half minutes at the conclusion of the two-hour race, where she also finished third overall for the day. Martinez, the reigning WXC Champion, holds a ten-point lead in the class after five rounds of racing.