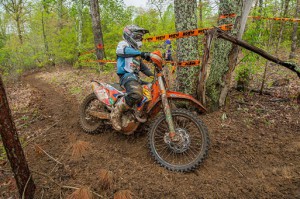 Bobbitt had a great day from start to finish. He finished the first two tests in 3rd position and remained close to the lead rider of Russell who had gone 1-2 in the opening tests. The two riders continued to lead the pack through the remaining tests with Russell having the edge over Bobbitt heading into the final test.

The sixth and final test of the day was a long 12-mile technical test. Rain the night before and intermittently throughout the race had made the course slick. Bobbitt exceled in the conditions and had a great run gaining 48 seconds on Russell.

"I felt really good in that final test," stated Bobbitt. "I actually started to catch Grant Baylor on the row in front of me before I fell off a bridge. It took me some time to get back on my bike but because I had been having a good run I was able to come out on top. I'm really happy with my performance today and glad to get the first win of the season."

Russell commented, "I felt pretty solid all day. Each race I am getting a little closer to getting the win. Bobbitt just rode really well all day and outperformed me in the last test. I'm looking forward to the next round and fighting for that top step."