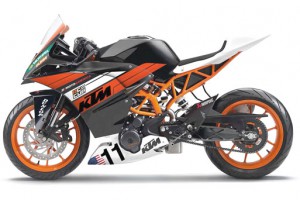 MotoAmerica and KTM are providing a new generation of American racers the platform to perform on a national and international level. KTM RC Cup racers now have a chance to earn the MotoAmerica AMA/FIM KTM RC Cup Championship.

The crowned champion will be rewarded with a sponsored ride for round 11 of the 2015 British Superbike KTM RC Cup Series at Silverstone in the United Kingdom. They will be provided a fully-prepped KTM RC 390 Cup Race Bike, KTM trackside support and paid hotel and travel expenses for the race. Second place finisher in the championship will receive $2,500 in KTM Cash, while third will get $1,000 in KTM Cash to be used for KTM products that will help them continue their racing career. Also, each race will include KTM Cash contingency paid out to the top five finishers with up to $500 for each race win.

(*subject to change, up-to-date schedule can be found at www.motoamerica.com)

The deadline for pre-order of the KTM RC Cup Race Bike has been extended to March 31, 2015. Quantities are limited and KTM RC 390 Cup race bikes are available on a first-come, first-serve basis and contact your local KTM dealer for more information. For further details about MotoAmerica and the KTM RC Cup, please visit www.motoamerica.com or www.ktmusa.com