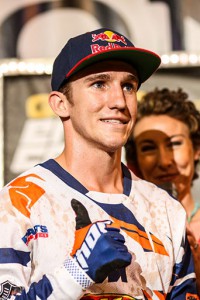 FMF KTM Factory rider Taylor Robert will not race the remainder of the FIM SuperEnduro Series after a pre-season injury turned out to be a more serious fracture in his wrist.

Robert fell during practice in December and injured his wrist. Upon first evaluation the doctors could not determine a problem and Robert continued to train as normal. Over the next two months the pain persisted. Robert went back for a second evaluation and found out he has a fracture in his scaphoid. The Factory EnduroCross and SuperEnduro rider will now undergo surgery on March 3rd to fix his wrist.

The surgery will cause him to miss the last three SuperEnduro's in Mexico, Brazil and France. He will also miss the opening two rounds of the AMA EnduroCross Series. If surgery and recovery go as planned the team expects him to return at the third round of the EnduroCross Series.