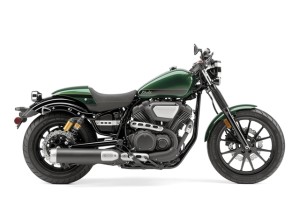 You would never think coffee and hardware would go together...and make sense. But that's exactly where we are at with the release of Yamaha Star Motorcycles' new Bolt C-Spec-all the stripped-down, no-nonsense attitude many have come to love about the Bolt, but with a hot splash of cafÃ© styling. With a few simple additions and adjustments, the Star Motorcycles design team has turned the Bolt into a cafÃ© racer for a new generation.

While the Star Bolt has only been around for an extremely brief period of time (a little over a year) in the realm of motorcycledom, the spry machine has already built up quite a following and proven that it can roll with the best of them in the form of an old school bobber, lean and mean chopper, pro-street racer, mini bagger, sinister Southern California Club Style bike, and just about any other style you can throw at it. And that's exactly what the Star designers did, they threw another style into the mix with the new Bolt C-Spec. 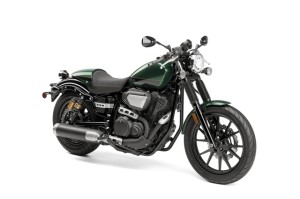 Based on the same frame and 942cc powerplant as the base model and R-Spec, the C-Spec stands apart from its brethren with the addition of clip-on handlebars, repositioned foot controls, taller suspension, fork gaiters, a relocated speedo, and a two-up seat with removable cowling. The results harken back to the lightweight speedsters British motorcycle enthusiasts used to race from cafÃ© to cafÃ© back in the '60s.

Where the base model and R-Spec place the rider in a more relaxed, upright riding position, the C-Spec is all about getting a bit lower-lower into the bike and leaning lower to the ground. The clip-on handlebars force the rider to lean a bit forward and for a more "in the bike" feeling. To help streamline the riding position and make things a bit more comfortable, the foot controls have been moved back 5.9 inches and up 1.3 inches. With the foot controls further back and higher up it helps improve the lean angle. In fact, the designers intend riders to really dig into the corners and therefore upped the suspension 9mm in the front and 6mm at the rear (travel remains the same at 4.7-inches), and a set of [mageProductLink sku="190-879743" title=""]Michelin Commander II[/mageProductLink] tires wrapped around the 19-inch front and 16-inch rear wheels ensure traction is at a premium. These slight changes result in a deeper lean angle, increased from 33 to 37 degrees, in addition, the new seat up the seat height to 30.1-inches, compared to the base model and R-Spec.

Once ad-on accessories for the base and R-Spec models, the C-Spec is outfitted with [mageProductLink sku="1tp-f31e0-v0-00"]fork gaiters[/mageProductLink] for a sportier look, and in a mix of rider comfort and classic cafÃ© styling, the speedo has been relocated to the front of the top clamp. The real essence of the cafÃ© racer pours from the C-Spec through its two-up seat with the rear section covered by a removable cowl. The cowl is a nod to the one-piece, tapered rear sections found on classic cafÃ© racers. 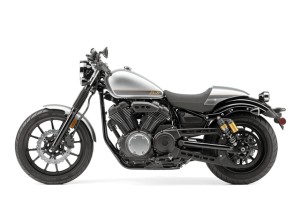 The C-Spec will be available in January in two color schemes Liquid Silver and Envy Green and will most likely find an immediately fan base amongst classic bike enthusiasts. If there's one group that may find it difficult to appreciate the Bolt C-Spec it'd mostly likely be the DIY'er, only because of the fact that Star Motorcycle has already done a great job of doing most of the customization work for them.