The 2015 Yamaha Viking EPS Side-by-Side is the modern-day workhorse. Built in the company's Newnan, Georgia, facility, this vehicle is the perfect companion for hunters and farmers.

Yamaha touts the Viking as the hardest-working and toughest side-by-side vehicles on the market. The Viking features superior handling, no matter what the terrain.

"The 2015 Vikings are in production and rolling out to dealers across the country this fall," said Steve Nessl, Yamaha's ATV/SxS group marketing manager. "From the summer farm shows to farmers and hunters who are starting to harvest crops and game in the field, we continue to get great feedback from current and future Yamaha Viking owners."

The vehicle also includes a durable cargo bed, which can hold up to 600 pounds - and that is a lot of gear. In addition, the Viking comes with a two-inch receiver hitch that can pull up to 1,500 pounds. 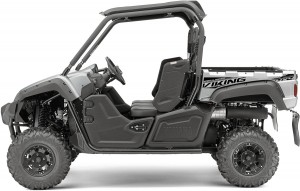 The 2015 Yamaha Viking SxS comes in a number of models with electric power steering. Here are the prices for each: