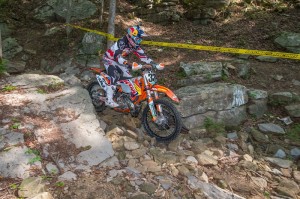 The event started with a hot lap around the short course for seeding times in the first knockout round. Robert would qualify 2nd, Russell 6th and Grant Baylor 8th.

In the first knockout the riders set out on the long course to complete one lap, in less than two hours. The top 25 riders would advance to the second knockout. Unfortunately, Robert missed a turn on in a tight tree section that cost him almost thirty seconds. Robert was able to maintain his position and cross the finish 2nd in adjusted time behind Cody Webb. Russell put in an impressive ride on his KTM dirt bike to advance to the second round in 3rd along with Baylor following in 4th.

As the second knockout round began a thunder storm rolled in making the difficult terrain even more challenging for the racers. Once again, Robert finished the long course in 2nd behind Webb, easily transferring to the final knockout. Grant Baylor managed to put in a solid ride finishing 8th, while Russell experienced a small problem near the end of the lap, but was able to cross the finish in 9th. Both Baylor and Russell qualified for the final knockout. 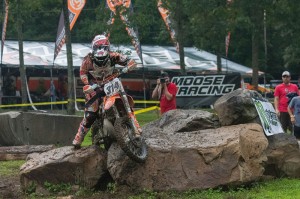 With the weather conditions worsening, the final knockout round was reduced to a five lap race with a waterfall obstacle on the last lap. On the first lap, Robert and Baylor came through 2nd and 3rd, side by side. It wasn't until the second lap that Robert was able to pass his teammate in the endurocross section. For the next two laps Robert tried to make up time on the lead rider of Cody Webb.

"It was going to be really tough to catch Cody on the final lap," mentioned Robert. "Cody had lapped so many riders that I hadn't and when I got to the waterfall and it seemed like every line had a rider or a bike in it. I finally made it up and over, but I just ran out of time. The course was really fun and my bike was set-up awesome for the terrain."

After overcoming the lapped riders and waterfall obstacle, Robert rode through the finish taking 2nd place overall. Grant Baylor stayed within thirty seconds of Robert for the entire five lap final, securing 3rd and his first TKO podium. Meanwhile, Russell struggled with lappers and crashes on the wet course and finished the day 14th overall.