The More You Know: Why Is California Keeping Lane Splitting An Underground Activity? 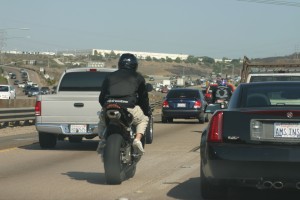 One of the many benefits of riding a motorcycle in California is the ability to split lanes, lane share, or filter through traffic. Lane splitting has been allowed in California (the only state to allow it) for many years; however there are still many motorists' young and old who don't know or don't realize that the practice of riding between cars is ok. A 2012 study by the California Office of Traffic Safety found that only 53-percent of vehicle drivers knew that lane splitting was allowed. Part of the problem as to why so many motorists don't know about motorcyclists' ability to lane split is because there aren't any certified laws in the books outlining it-only general guidelines. The other problem is it isn't (or wasn't until recently) highly promoted.

In the 100-plus page California DMV Driver's Handbook there is but one page that talks about sharing the road with motorcycles and on that one page is only two brief bullet points discussing lane sharing/splitting. In fact, you could say that the first bullet point about lane sharing is actually counterproductive to the safety of motorcyclists and leaves a negative image in the readers mind, as it states, "Allow the motorcycle a full lane width. Although it is not illegal to share lanes with motorcycles, it is unsafe." The California DMV Motorcycle Handbook is at least a little better offering up a half a page to discussing lane splitting and things for motorcycle riders to consider. But if you're not a motorcycle rider it's pretty certain you're not going to read that handbook and therefore won't know about or understand lane splitting.

If one was so inclined, they could find the same lane splitting guidelines on the California Highway Patrol's website as well as in pamphlets in their offices, until recently that is. According to a press release from the American Motorcyclist Association, the guidelines were removed from the DMV and CHP's websites as well as other government agencies at the urging of Kenneth Mandler, of Sacramento, Calif., who petitioned the Office of Administrative Law in the fall of 2013, claiming that the CHP guidelines were an "underground regulation" -- a rule that would be enforced, even though it had not been the subject of the Administrative Procedure Act's prescribed process.

This is a very weird scenario because whereas Mr. Mandler claims the guidelines were an "underground regulation", now with the dissemination of the information stripped from these major government agencies lane splitting will continue to be a considered an "underground activity".

California has been promoting motorcycle safety to all those on the road through the use of those overhead electric CalTrans signs on the freeways stating "Share the Road Look Twice for Motorcyclists," for several years now. As motorcyclists we greatly appreciate this awareness campaign. However, it wasn't until recently that the state was attempting to educate the general public about the practice of lane splitting through radio and television PSAs sponsored by the California Highway Patrol and the Office of Traffic Safety, titled: Lane Splitting - Getting Home is a Shared Responsibility. That's all gone now as a search for any videos of the PSA seemed to have been scrubbed from the internet, as evidenced on the Lanesplittingislegal.com website. Only transcripts remain of the two radio PSAs on the Lanesplittingislegal website, as the links to the .wav files bring up the 404 not found error message. We did find one of the radio spots on YouTube:

Hopefully this can all get settled quickly and the guidelines will get reposted and the state agencies will continue to help educate and promote rider/driver awareness about lane splitting. You can help do your part to help bring the guidelines back by signing the petition the American Motorcyclists Association started. In the meantime remember one way to help you stay safe on the road is to where bright colored riding gear. And when/if you do split lanes heed the number one recommendation of the California Highway patrol and travel at a speed that is no more than 10 MPH faster than other traffic. Thankfully the AMA site has a link on their website where you can download all the CHP guidelines.

What are your thoughts on lane-splitting? We'd love to hear them, so comment below.