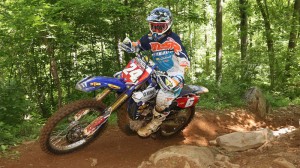 Brad Bakken grabbed his first-ever national victory with an impressive performance at the Jester National Enduro in Arrington, Virginia, taking advantage of the absence of point leader Charlie Mullins who dislocated his wrist earlier in the week.

The Jester National Enduro was a new addition to this year's Kenda AMA National Enduro schedule, held on the 5000-acre Oakridge estates and featuring never before used single-track, the event quickly sold out its 600-entry allotment.

Bakken got of to a quick start in the 65-mile race, winning the opening test of the day and building a cushion that he would rely on for the rest of the race. Test one would be the only test the N-Fab/Am Pro Yamaha rider would win all day, but it gave him just enough of an edge to hold off runner-up finisher Nick Fahringer by 15 seconds at the end of the day to claim his first-ever series win.

"I'm just really excited to get my first overall win, and especially to get it here in Virginia," said Bakken. "I knew going in it was going to be a fun event because it's kinda like a home race for me, since I live in Virginia."

Fahringer came on strong in the end to secure second after getting off to a slow start. The AirGroup Husqvarna racer was eighth fastest in the six-and-a-half-mile opening section, which put him in a hole from the get-go. However, the Ohio rider won tests two, four and five to move up into contention for the win.

"I dug down deep and I think I beat Brad in all the rest of the tests, but I just put myself in too deep of a hole in that first test," said Fahringer. "But honestly, this was a home race for Brad and he made me work for it and I just came up a little short." 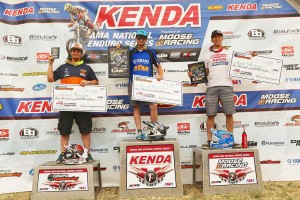 "This was my second time on the podium and it was a really good day for me," said Baylor. "I started out a little bit slow, I was sixth at the beginning of the day, but I finally loosened up and the trail started flowing a lot better for me and I started twisting the throttle a little bit more and making up positions."

Fourth went to Factory Husqvarna Racing's Andrew DeLong, who the event with the third-fastest time in the first two tests, however, a mistake in test five dropped the FE-350 rider to fourth at the end of the day.

"I was feeling really good and I was in a solid position overall," DeLong said. "But on test five, things took a turn for the worse. I made a wrong turn at some point and I think I finished seventh in that test."

Jesse Groemm as second in the first test, but was 14th in test two, which put him out of the running. The Maxxis/Klim/DirtWise KTM rider was strong in tests four and five and was able to salvage fifth for the day.

American Beta's Cory Buttrick had one of his best rides of the year for seventh, finishing 33 seconds ahead of AirGroup Racing's Ryder Lafferty in eighth.

Craig DeLong was ninth overall and first in the Rekluse AA-Expert class, with KTM rider Paddy Holloway rounding out the top 10.

Despite the absence of Mullins, the FMF/KTM rider still holds the lead in the series points standings due to the fact that he held a 40-point lead in the series heading into the Virginia race. However, after the Jester National Enduro, Fahringer now sits just 15 points out of the lead, with Bakken another six points back, meaning the series has all of a sudden tightened up.

So far, the end of year purse is up to $2000 for the Rekluse Expert-AA Class Championship end-of-year purse. 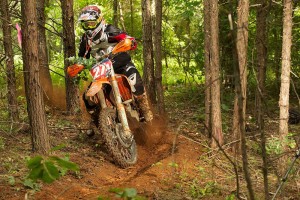 It was a closer race after the news that the reigning champion and current point leader Charlie Mullins would miss this round due to a wrist injury earlier in the week. Riders arrived eagerly to the new course which consisted of a lot of tight woods and virgin trail.

Baylor started strong with two top five test scores right off the bat but lost some time in the third test section. He climbed himself out of that rut and into podium position with double wins on the last two test sections. His scores earned him a 3rd place result just 24 seconds off of the 2nd place time.

"It feels great to get back on the podium," stated Baylor. "I have been working hard and hope to continue to improve upon my results for the remainder of the season like I have today." 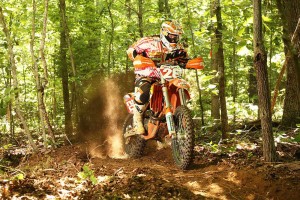 Lafferty had his most consistent race of the season. The majority of his test times were inside the top five which kept him in contention for 5th place throughout the race. Unfortunately, he fell a little shy of that position at the end and settled for 6th for the day.

Joining Mullins on the sidelines was Factory FMF/KTM rider Steward Baylor. The oldest Baylor brother suffered a concussion earlier this year and is still healing. He is expected back at the next round.

Despite missing the race, Mullins still leads the championship series by 15 points. Dirtwise KTM rider, Jesse Groemm, who earned 5th overall at the Jester National Enduro, is the next closest KTM rider sitting 4th in the overall standings. 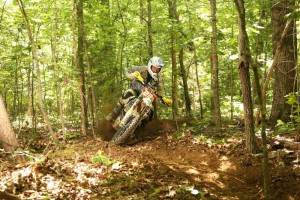 Round five of the AMA National Enduro Series in Arrington, Virginia saw Factory Husqvarna's Andrew DeLong ride to another solid top-five finish. The FE 350-mounted rider started the day in strong contention for a podium finish, but ended his day doing damage control after a mistake in test five. Ultimately, DeLong was forced to settle for a fourth-place finish at The Jester National Enduro.

Mother Nature once again set a beautiful stage for racing with a warm, sunny day. Rain from earlier in the week left the dirt nice and wet in the wooded areas, with only small amounts of dust in the fields. Andrew made the most of the fantastic conditions and started his day with top-three finishes in the early tests.

"I was feeling really good and I was in a solid position overall," Andrew said. "But on test five, things took a turn for the worse - or rather, I did. I made a wrong turn at some point and got lost. I think I finished seventh in that test."

From that point, Andrew pushed to make up ground on the front-runners. Tests six and seven went well, but not well enough to regain a spot on the podium. DeLong collected a fourth-place finish, and now sits tied for fourth overall in series points.

The podium was not without a Husqvarna, however, as AirGroup Racing Husqvarna's Nick Fahringer once again carded a second-place finish. Fahringer has a firm hold on second overall in championship points at the halfway point of the series. With points leader Charlie Mullins out with an injury, the odds are now in Fahringer's favor heading into the second half of the season.

Fahringer's AirGroup Racing teammate Ryder Lafferty scored his second top-ten finish in a row. The rookie Pro finished eighth overall, followed by DeLong's younger brother, Craig, who overalled the AA-expert class and made it four Husqvarnas in the top-ten with ninth overall!


The Jester Overview And Point Standings