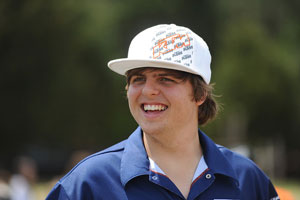 Factory FMF/KTM rider Steward Baylor earned a podium finish at the opening round of the OMA National Series despite a few set-backs at the end of the race.

Baylor jumped off the line to a great start and battled with Paul Whibley and Jason Thomas in the opening laps of the race. Track conditions and weather were perfect for the riders in attendance. Each of the top three riders held the lead at one point in their close battle for the overall win.

Baylor was leading the race until the final lap, when he stopped to pit for gas. "I didn't realize it was the final lap and thought we had one more to go," stated Baylor. "I stopped to re-fuel and let them by. At that point, I was too far back to make up the time lost with less than a lap remaining." Whibley went on to take the win while DirtWise/KTM rider Jason Thomas finished 2nd and Baylor crossed the line in 3rd.