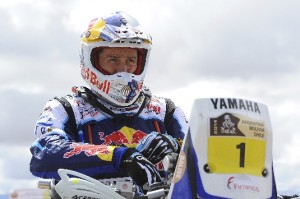 Despres Scores Maiden Dakar Special Stage Victory with Yamaha The wait is over today as Yamaha Factory Racing's Cyril Despres made a little piece of history, taking his maiden stage victory with the manufacturer. After a challenging first half of the 2014 Dakar Rally, Despres was on fine form today, controlling the pace at the front of the field with his YZ450F machine to complete the special stage over two minutes clear of his rivals. The result moves him up a place in the overall standings to ninth.

The defending champion started third this morning on the 499km special, and was quick to catch Marc Coma before closing in on Joan Barreda as they tackled the route around the salt pans of Uyuni. Despres eventually arrived at the bivouac in Calama 2'09 ahead of Barreda and 2'15 in front of Marc Coma.

The other two Yamaha Factory Racing riders also posted fine results with their YZ450F Rally machines, Olivier Pain finishing fifth, 10m40s behind and Michael Metge just behind in sixth, 12m58s from the front. The results mean Pain retains sixth overall and Metge sits in 14th position. Chile's Ignacio Casale took today's stage win on his Yamaha Raptor to keep the overall lead in the standings and Uruguay's Sergio Lafuente came third to hold second overall. Polish rider Rafal Sonik was not far behind in fourth, which keeps him third overall and makes it still a Yamaha top three.

"I have to be honest and admit that I didn't set out this morning to win the special, it was more a by-product of my determination to move up the overall rankings. I won't deny though that I'm delighted with the result, both for myself and for Yamaha. Yesterday wasn't easy, with an early start on the bivouac and rain on the liaison. Then at altitude I wasn't 100%, with the thin air making it hard work on the bike. When we finally got to the bivouac in Bolivia myself and Mika took a long time to clean up the bikes and make sure they were up to today's special, finishing at around ten in the evening. Then this morning we had more rain at the liaison, though fortunately the special was mainly dry. Tomorrow should be an interesting day riding to Iquique and there could be quite a lot of navigation. It won't be easy opening the piste but I will continue to push."

"Overall the marathon stage was positive; I'm here at the end without injury which given the conditions, especially the altitude, was far from being a foregone conclusion! And although I haven't gained any places overall I've moved closer. The other day I was 45 minutes off the podium, now I'm 30 minutes, so it is moving in the right direction. If I am to attain my goal however I can't afford to make any errors from here to the end."

"A couple of tough days, but not too many problems. I didn't suffer too much with the altitude, but my ears hurt like hell coming down! Then on the liaison today into the bivouac there was a really strong wind and we had to ride at an angle so as not to get blown over. Equally impressive were the number of people who came out to welcome us in Bolivia. Excuse the pun - but I was blown away!"