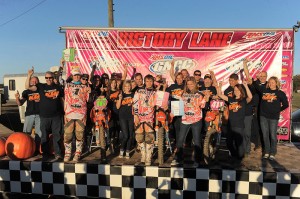 It was a phenomenal weekend for the Factory FMF/KTM Team as three of its riders earned championships at the GNCC Finale. Kailub Russell claimed his first GNCC XC1 Championship after taking the win over teammate Charlie Mullins, while Grant Baylor secured the GNCC XC2 Pro Lites Championship in his rookie season and Maria Forsberg earned the GNCC Women's title for the fourth consecutive year.

In the GNCC XC1 class, the battle would remain between the two KTM teammates, Russell and Mullins, just as it had the entire season. The two teammates arrived at the Ironman GNCC with only two points separating them for the championship battle. The title would come down to the rider who finished ahead of the other at the end of the 3-hour dirt bike race.

At the start, it was Mullins who had the better jump coming around the first corner in third place. Russell, who accidentally jumped the start, shut off his bike and waited in order to let the other riders go after he realized he had jumped early. By the third corner he had worked his way through the pack to tenth. He continued to push forward, and shortly into the first lap, found himself behind Mullins who had taken over the lead. The two KTM teammates continued to push each other and quickly began to pull away from the pack. At the end of the first lap, Russell was held aside for 15 seconds for an added penalty for jumping the start.

After the penalty, Russell sat 16 seconds behind Mullins. He spent the next half of a lap working his way back toward the front. He soon found himself right where he left off trailing Mullins by a couple seconds. At the halfway point, Russell made a pass for the lead and was able to make it stick on Mullins. Neither rider fell off the pace and they continued to battle, at some points side by side as they headed into and out of the woods. 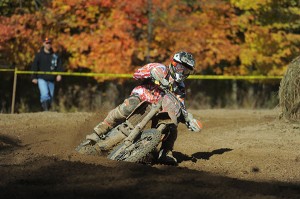 Charlie Mullins fought hard for a win and the championship, but had to settle for second - Photo: Harlen Foley[/caption]

With two laps to go, Mullins made a mistake on the Ironman hill and did not make it up. He had to go back down to get a run at the hill and made it up on his second attempt. The mistake cost him about 20 seconds and allowed Russell to pull ahead. Russell took advantage of that mistake and put his head down and charged forward to pull a gap on Mullins.

Russell crossed the checkered flag approximately 35 seconds ahead of Mullins to take the win and the championship. "I am very excited to get this championship," stated Russell. "Charlie and I both worked hard this year and it was a great battle. He helped push me and I did the same for him. I am happy to be here racing with the best in the world and couldn't be more proud to be on top of the podium. I'd like to give a huge thanks to my team, family and friends that helped support me this year."

Baylor came into the finale with a 21 point lead in the XC2 Pro Lites Championship. "I knew I had a big lead coming into this race, but you never know what can happen," stated Baylor before the race. "I am going to give it my all and try to get back on the podium this event."

Baylor earned a second place start off the line and was running near the top three the majority of the race. With two laps to go, Baylor was sitting in second place and matched the lap time of the lead rider. Unfortunately, on the final lap he suffered a big crash and lost a lot of time. He was able to recover from the crash and finished the race in sixth place to clinch the championship. 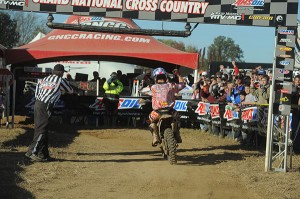 Kailub Russell crossed the checkered flag approximately 35 seconds ahead of his teammate to win the championship - Photo: Harlen Foley[/caption]

"I am very happy to finish the race," stated Baylor. "I took a rough hit on the last lap and broke my neck brace. Luckily, I am not hurt and was just shaken up a bit. I am very happy to win this championship for my team in my rookie season. I hope to come back healthier next year to defend my title."

Forsberg, who had already wrapped up her GNCC Championship a round early, shocked the crowd by announcing her retirement from the series. "I have accomplished a lot in my racing career and I am thankful to every person who has helped me. It has been a very emotional experience saying goodbye to everyone who has been a part of my GNCC career. It is both a sad and happy day."

Forsberg went on to battle fellow KTM rider Kacy Martinez for the two hour women's race. At the end of the race, Martinez captured the win by a 4 second margin over Forsberg. "Kacy deserves this win today," stated Forsberg. "She challenged me all season and I am happy to have raced against her and wish her luck in this series next season."

Factory FMF/KTM Team Manager, Antti Kallonen, commented, "This has been a perfect end to a great season. It is a wonderful feeling to capture three championships at the end of the year. All of our riders put in incredible performances this year and their effort on and off the track paid off with three number one plates."