Marc Marquez Extends His Lead With Victory At Aragon 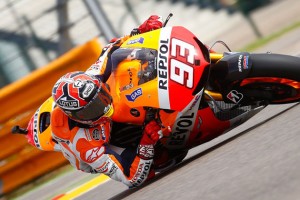 returned to his winning ways at the Motorland Aragon circuit in Spain during the 14th round of MotoGP's 2013 competition. The Honda rider extended his lead in the MotoGP standings with a narrow victory over defending champion Jorge Lorenzo. With the win, Marquez claimed a 39-point lead over the second-place Lorenzo.

"Today was a very grueling race, because I had to make two comebacks: The first was to catch Jorge [Lorenzo] after he broke free at the start, then I needed to make another after Dani [Pedrosa] passed me and I wanted to overtake him after two laps," Marquez said after the race. "... I was eventually able to overtake Jorge and take the victory, which is important in terms of both the 25 points and for my morale."

The race wasn't without drama, however. As Marquez was attempting to pass his teammate Dani Pedrosa, he accidentally tapped his bike, breaking a cable and causing Pedrosa to crash. Pedrosa was unable to finish the race and fell further behind the two leaders in his quest for the championship.

The next round of the motorsports series will take place Oct. 13 in Malaysia.