Americans Ready For Motocross Of Nations 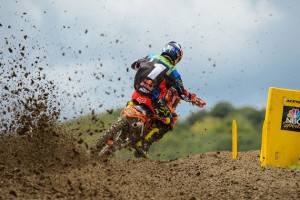 Some of the world's best motocross riders have descended on Germany for the 67th annual Motocross of Nations. More than 40 countries are competing in this year's event, dubbed "Des Nations," and talented Americans will look to regain the title that the country has won 22 times in the past.

Team USA is headlined by Ryan Dungey, Justin Barcia and Eli Tomac. While that is a solid squad, it is missing the reigning AMA National Champion, Ryan Villopoto. The Kawasaki rider needs surgery on his foot and will miss the event, leaving the U.S. without its fastest racer for the second year in a row. He missed last year's race with a knee injury.

Still, the squad has a chance to claim one of the coveted spots on the podium, although they will certainly be looking at bringing the championship back to the U.S. after 2012's near miss.

"From all reports it's all going to hinge on the start on that track, but at the Des Nations you always need a big dose of good luck," Rob Twyerould, KTM team manager, told Full Noise. "Every team seems to have some sort of issue or drama - there's always high drama - but if three boys can get a clean start and complete every race, they're always in contention for a podium."