Jorge Lorenzo Gets Back On Top At Silverstone 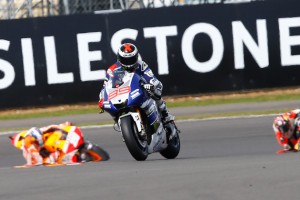 Defending MotoGP champion Jorge Lorenzo got back to his winning ways at the British Grand Prix at the Silverstone circuit. The Yamaha rider barely edged out rookie rider Marc Marquez, who was coming off a string of four consecutive wins, by 0.081 seconds.

"This was one of the best races I've ever had," Lorenzo said. "I'm really happy and really pleased. It's a very important win. I pushed from the beginning to try and open a gap, even more than in recent races but it was impossible."

The round, which was the 12th of 18 scheduled for the year, was filled with drama. Marquez crashed in warm ups and dislocated his shoulder, but received immediate medical attention and was given the OK to race. He battled with Lorenzo throughout the main event, and the two riders traded leads as they made their way around the British circuit. Lorenzo eventually managed to pull away at the end and take the victory.

Even with the second-place finish, Marquez continues to lead the motorsports standings. He currently is 30 points ahead of teammate Dani Pedrosa, who finished in third place at the British Grand Prix, and 39 points ahead of Lorenzo.