Looking Ahead To The Bridgestone Indianapolis Grand Prix 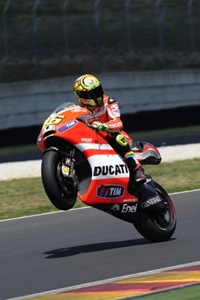 Summer is still going on, but MotoGP's seasonal break has finally come to an end. After several weeks off, some of the world's top racers are getting back into action at the Indianapolis Motor Speedway in Indiana. The U.S. circuit will host the 10th round of the motorsports series, and it is the third and final time MotoGP will make an appearance in America this year.

"After the paddock enjoyed its summer break, it is great to get the second half of the MotoGP season underway this weekend at such an iconic venue as the Indianapolis Motor Speedway," said Hiroshi Yamada, manager of the Bridgestone Motorsport Department. "The championship is delicately poised, and with three back-to-back races coming up, the next few weeks will be a major factor in deciding who will be this year's MotoGP World Champion."

Rookie Marc Marquez took the lead in the standings after the last event and currently sits 16 points in front of teammate Dani Pedrosa. The two Honda riders will have to contend with reigning champion Jorge Lorenzo, who is in third place overall after an injury disrupted his racing.

The Indianapolis race will also mark the first time SiriusXM radio broadcasts a MotoGP race as part of a new contract with the league, giving fans across the country access to real-time updates.