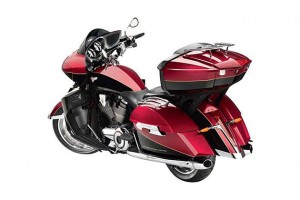 As the world moves toward the final leg of 2013, many manufacturers are setting their sights on the next model year. Victory Motorcycles is no exception. The brand recently revealed its lineup for 2014, which celebrates its 15th anniversary of American-made production with price cuts and special offerings.

At the center of Victory's new lineup is widespread improvements made to its baggers, including the Cross Roads 8-Ball and the Cross Country 8-Ball. But perhaps the most interesting change comes with the Ness Cross Country, which is the latest from the Ness Signature Series. This bike has been completely customized with special chrome highlights, a new seat and plenty of other changes to the motorcycle gear.

"We worked hard to add features and attain price points that make 2014 Victory motorcycles more desirable than ever before," said Steve Menneto, vice president of Polaris Motorcycles, as quoted by PowerSports Business. "Riders know that a Victory is a rider's bike, and now we have loads of options for them, whatever their style."

Several other motorcycles are also being introduced as part of the 2014 lineup, and each offers a special blend of unique qualities at relatively affordable prices.