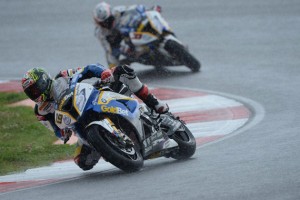 Some big changes are coming to the World Superbike competition. BMW Motorrad has announced that the 2013 motorsports season will be its last - at least at this international level. Once the current season comes to a close, the organization will end its commitment to the league in an effort to focus more attention on its customer sports program and similar activities.

BMW Motorrad began competing in the FIM World Superbike division in 2009, and since that time it has established itself as one of the top manufacturers. The group was always challenging for the No. 1 spot in races, racking up 11 total race wins and 33 podium appearances with its BMW 1000 RR bike.

"Only those who act consistently today are well prepared for the challenges of tomorrow," said Stephan Schaller, the general director of BMW Motorrad. "BMW Motorrad will remain involved in motorsport and in doing so we will focus on the international customer sport in all its facets. I want to thank everybody who has supported us on this long and successful journey."

Factory riders Marco Melandri and Chaz Davies, who have raced for BMW Motorrad over the past few years, will have to search for a new team to join.