Looking Ahead To The Dutch TT At Assen 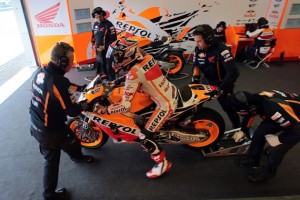 The seventh round of the 2013 MotoGP season is set to be one of the most interesting races yet. Scheduled for June 29 and 30 at the Assen circuit in the Netherlands, this event could potentially help some racers separate themselves from their competitors.

With Jorge Lorenzo sidelined due to a broken collarbone, which required surgery earlier this week, the field is wide open for someone to make a move to the front of the pack. The favorite will be Lorenzo's rival Dani Pedrosa, but Marc Marquez shouldn't be overlooked. After topping the timesheet during testing, the rookie will be one to watch during the event.

Lorenzo's teammate Valentino Rossi may also challenge for the win. He has been steadily improving over the course of the season and finished second in the free practice testing, so if he can put it all together he could easily land atop the podium.

All riders will have to navigate potentially tricky situations, using the best motorcycle gear to gain an advantage whenever possible.

"The Dutch TT at Assen is often an intriguing race, as the circuit is fast and presents many overtaking opportunities," said Hiroshi Yamada, manager of the Bridgestone Motorsports Department. "The weather often plays its part at this event, and in recent years we have experienced a lot of variability in weather conditions, ranging from cold and wet to very warm and dry."

After seeing what happened to Jorge Lorenzo on a wet track, riders will likely be a bit more cautious if rainy conditions come to the circuit. Lorenzo's crash caused serious damage to his clavicle and required surgery to repair, but the Yamaha rider will still be on hand at Assen to watch the race play out, Supersport.com reports. His return is currently unknown, but if he can battle back quickly and some events shake out in his favor, he could still challenge for the championship.