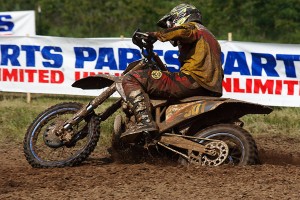 Nick Fahringer claimed his first career OMA win at the fourth round of the OMA Series - Photo: John Gasso[/caption]

AirGroup Radiant Husaberg rider Nick Fahringer claimed his first career OMA win at the fourth round of the OMA Series and was joined on the podium by Factory Husaberg rider Russell Bobbitt.

The course was trimmed down to 7 Â½ miles after a rainstorm Saturday night made a portion of the original loop unrideable. The riders did some last minute prep to their dirt bikes for the slick mud and lined the gate on Sunday morning ready to get underway.

Paul Whibley earned the holeshot, followed by Bobbitt, Fahringer and Kailub Russell. The four riders remained close on the first lap constantly battling for the lead position. "The first loop was the most fun as we were able to dice back and forth for the lead," commented Fahringer. "I was able to slingshot my way around Whibley on the second lap to take over the lead and immediately pressed forward to try and pull a large gap." 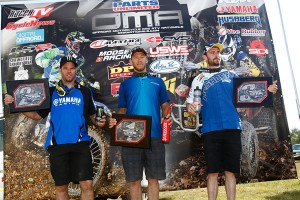 Fahringer stretched his lead to around two minutes by the end of the third lap and continued to charge forward. He went on to lead the remaining laps of the race to take his first OMA career win by over one minute on the second place ride of Whibley. Bobbitt was not far behind, rounding out the podium in third position.

"I made a few mistakes early in the race," stated Bobbitt. "I had a lot of fun today and am glad to still finish on the podium and maintain the points lead as we hit the halfway mark on the series." Now four rounds into the series, Bobbitt holds a 10 point lead over Fahringer in the championship point standings.