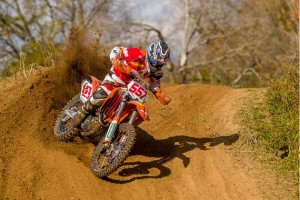 Factory FMF/KTM rider Kailub Russell took his first win of the OMA season at the third round of the series.

Russell did not have the jump off the start he anticipated and he was sitting in last position as the riders came around the first corner. A short ways into the first lap the riders approached a large technical hill climb.

"In one way, I guess I was lucky I was in last place as we got to the hillside because I could see where everyone had crashed," remarked Russell. "I was then able to take a better line up the hill which allowed me to move up to second position by the top of the hill."

Russell maintained second place for the next three laps while the course started to break in. "Once there were some good lines in the course it became easier to not make mistakes and those of us in the top three were able to pull away," stated Russell.

Around the halfway point, Russell was able to move into first after Paul Whibley stopped for fuel. Once in the lead, Russell never looked back and went on to win the race by 40 seconds. 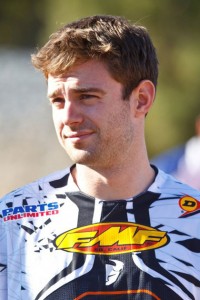 Husaberg Factory rider Russell Bobbitt took another podium finish at the third round of the OMA National Series to maintain his point lead in the championship standings.

Bobbitt got off to a decent start and was sitting inside the top five as the riders rounded the first corner. A few hundred yards into the course, the riders encountered a large rutted hillside that held many riders up. Unfortunately for Bobbitt, a rider crashed right in front of him on the hill which caused Bobbitt to lose his momentum and find a new line up the hillside. He quickly maneuvered around the rider and was sitting in third position at the top of the hill.

In the next two laps Bobbitt charged forward and actually held the lead at one point before he slid out in a slick corner allowing the top five riders to pass. Bobbitt spent the remainder of the race catching back up to podium position. On the last lap he had a great battle with Jordan Ashburn for the final podium spot. With only three corners to go, Bobbitt was able to come up on the inside of Ashburn through the turn and make a pass for third position. Bobbitt's podium finish keeps him in the lead in the overall point standings.

AirGroup Radiant/Husaberg rider, Nick Fahringer, also had a decent finish at the Bedford round. Fahringer, struggled with a poor tire choice at this race, but still managed to finish fifth overall on the day. "I would have definitely liked to finish on the podium today, but I am happy I was still able to salvage a top five position," remarked Fahringer.

Both riders now have a two week break before they head to the fourth round of the series to be held in Fort Smith, AK on May 26, 2013.