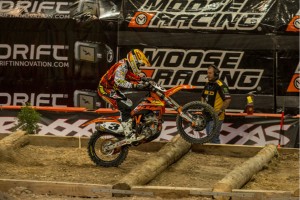 Round one of the 2013 GEICO AMA EnduroCross series, fueled by Monster Energy and presented by Lucas Oil kicked off on Friday night inside the Orleans Arena and Mike Brown established himself as a serious title contender with a convincing main event win over Taddy Blazusiak and Colton Haaker. Brown led every lap and opened up a nine second lead but was only two seconds clear at the finish as Blazusiak, Haaker and Cody Webb closed up while fighting for second.

Brown was strong all day and set the fastest time during the afternoon qualifying laps, won his heat race and then set the fastest time again during the new night time hot lap that determines the gate picks for the thirteen main event qualifiers. The new night time hot laps had the crowd on their feet and Brown set the fast time to get the first gate pick. Blazusiak, Webb, Cory Graffunder and Kyle Redmond rounded out the top five.

Brown rocketed into the lead on the start of the main event and was closely followed by Blazusiak, his KTM Teammate. Brown, who switched from a KTM 250 to a 350 for 2013 steadily pulled away from Blazusiak and opened up a nine second lead but then proved that no lead is safe in EnduroCross as he got stuck in the last rock section. At that point, Blazusiak, Haaker and Webb had a fierce battle going on for second and were within sight of Brown as he blasted through the wood pile and over the finish line. Brown was happy with his second ever EnduroCross win and said "I put five hard laps in with no mistakes and the white flag came quicker than I thought it would. It feels good to get a win to open the season."

Blazusiak had an off night and said "I have a few things that I think I can make better for the next race". Haaker, who is riding for the Rockstar Energy, Lucas Oil backed JCR Honda team rode well to take the final podium spot in spite of a tight race with Webb. "I got a good start from the second row and worked my way up to third and I felt like I could have made an aggressive move on Taddy in the second to last turn but I knew he would not give it up easily so I decided to check up". 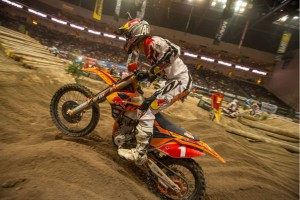 Taddy Blazusiak had a fierce battle for second, finishing within seconds of first - Photo: Drew Ruiz[/caption]

Webb, now riding a Beta two-stroke had to come back from a terrible start to finish fourth ahead of Geoff Aaron, who is now riding a Red Bull backed KTM 350. Monster Kawasaki's Taylor Robert finished sixth ahead of Husqvarna's Cory Graffunder, RPM KTM's Kyle Redmond, Monster Kawasaki's Justin Soule and Beta's Max Gerston rounded out the top ten. Destry Abbott was eleventh, Jamie Lanza twelfth and Gary Sutherlin was thirteenth in the main.

The night also included support classes and Kurt Nicoll started the night off by winning the Vet 35+ class ahead of Ty Davis and Colby Begin. Tyler Murray won the Open Amateur class by taking the lead in the last turn from second place finisher, David Broderick. Gavin McCarthy finished third. Australia's Jack Field wowed the crowd by pulling a backflip off the finishline log while taking the win in the TrialsCross class. Ty Cullins and Ty Tremaine finished second and third.

Round two of the GEICO AMA EnduroCross series will take place in Sacramento, California inside the Sleep Train Arena on Saturday, June 8th. You can get tickets at Ticketmaster.

Prior to heading to Sacramento, most of the top EnduroCross riders will make a trip to Barcelona, Spain for the second of the Global X Games Enduro X events. That event will take place on Saturday, May 18th and will feature live ESPN coverage. 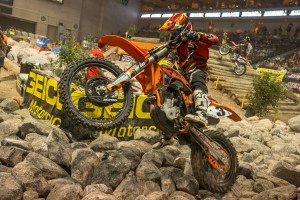 Brown was the highlight of the show from the afternoon hot lap session where he earned the fastest time until the final finish line jump where he secured his first win. Brown never showed any signs of struggling and made the technical track look easy as he worked toward his win.

Brown, an X-Games EnduroX Gold Medalist, was placed in the first heat where he choose the far inside gate. His gate choice paid off and earned him the holeshot and helped him to lead every lap to easily qualify into the main event. Blazusiak followed in Brown's footsteps and also took a heat win aboard his KTM 350cc machine.

The AMA EnduroCross Series added a new element to its night show line-up for the 2013 season where the twelve riders that qualify for the main event ride in hot laps with the fastest person getting first gate pick. Brown again took the honor of holding the top spot after turning a 40.1. Blazusiak earned the second choice spot with a time of 40.2. 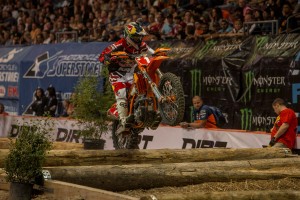 Taddy Blazusiak was happy with his performance, but is shooting for the top step - Photo: Drew Ruiz[/caption]

The two riders choose the two inside gates for the start of the main event. Just as predicted, they rounded the first corner in that order with Brown taking the holeshot and Blazusiak in second. The two riders never changed position throughout the twelve lap main event. Brown went on to earn his first career EnduroCross win while Blazuisak took the runner-up position with Colton Haaker rounding out the podium in third.

"It feels so great to get my first win tonight. I've been training hard and working toward this goal for a few years now and everything finally feels right. I am extremely grateful to my team that has been behind me this season and built me a great bike. I hope to carry my momentum into the next round and work toward a championship," stated Brown.

Blazusiak was also happy with his performance, "I struggled a little bit with bike set-up this morning but everything was improved for the main event. I am happy to start the season off on the podium but I definitely have a goal of being on the top step and will shoot for that at the next round."

Factory FMF/KTM rider and the reigning Women's EnduroCross Champion, Maria Forsberg, had a spell of bad luck in her main event. She grabbed the holeshot in the main but made a mistake approaching a large log section which sent her back to second place. A corner later she was taken out by another rider and because of the position of her fall, had to wait for all riders to pass by before she could get back on her bike. She restarted in last position and in the short three-lap race was able to climb back to fourth place just barely missing out on a podium finish.