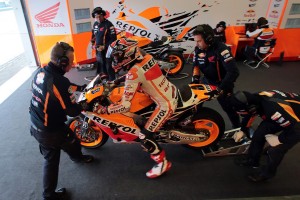 Marc Marquez testing his bike in Jerez with the rest of the Repsol Honda team.[/caption]

It didn't take long for MotoGP rookie Marc Marquez to make an impact on the motorsports series. In just the second race of his young career, the Repsol Honda rider won the holeshot and outmaneuvered several riders who challenged him to earn the victory.

With the win, Marquez - who is all of 20 years old - became the youngest rider to ever win a premier-class grand prix.

"After taking my first podium in Qatar I was very happy, but I am even more so today after my first win," Marquez said. "It went better than I expected and I am very grateful to the team for their efforts over the preseason - we have worked very hard and, without this, the victory would not have been possible."

Marquez's teammate Dani Pedrosa finished less than two seconds behind for second place, while defending champion Jorge Lorenzo came in third. Now Marquez and Lorenzo are tied for the lead in the points standings and Pedrosa is hot on their trail, although anything can happen in the long season. Other competitors, like Valentino Rossi and Cal Crutchlow, are only a few points behind the top three and have been performing well throughout the preseason and first few races.