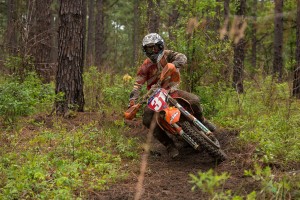 Factory FMF/KTM rider Charlie Mullins took his third win of the season at the fourth round of the Rekluse/AMA National Enduro Series where he won all six special tests in route to victory.

Rain the night before and morning mist had made the first few sections quite muddy. This proved to be no challenge for Mullins and his KTM 350 XC-F. He crushed the first test section taking the win by 37 seconds. He continued to stretch his lead in the remaining tests, taking the win in all sections. At the conclusion of the race he won by a margin of over two and a half minutes ahead of Husaberg's Russell Bobbitt.

"I have never won all six special tests before," remarked Mullins. "It feels pretty cool to do that. I felt really good today and had no issues. My bike was flawless. My team did a great job with my bike and I am grateful I was able to do my end and get the win."

Now four rounds into the series, Mullins leads the championship standings by 11 points. 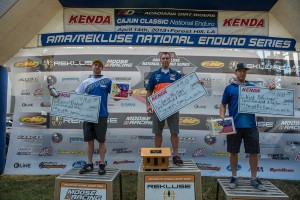 Bobbitt rode strong from the opening test to the final test section. The 4-time National Enduro Champion finished 2nd in four of the tests to help maintain a gap over third place. At the end of all six tests he was able to take home 2nd place with a margin of 1 minute and 26 seconds over Fahringer.

"The track was definitely muddy in sections and very slick to ride, but overall I felt pretty good today," commented Bobbitt. "I had a lot of fun in the second test section. It was really sandy which made it a blast to ride. The third section was pretty hard-packed and slick and I didn't enjoy that one as much. The fifth and sixth tests were pretty fast paced and I was able to ride pretty strong in those tests. I am happy with a podium result today but definitely looking to get up to the top step of the podium."

Fahringer also had a solid day only falling outside the top five in one section. His best test results came in the final few sections where he was able to make up time to place his Husaberg into a podium finishing position. Finishing just off a podium spot was 8-time National Enduro Champion, Mike Lafferty. The veteran rider turned consistent times throughout the day to place fourth overall. The riders now have a two week break before they head to the fifth round of the series to be held in West Point, TN.