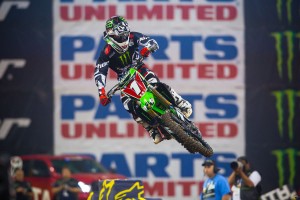 Ryan Villopoto won the race at this venue last year, and that, coupled with his recent string of victories, makes him the favorite heading into the weekend.[/caption]

It's been a few weeks since AMA Supercross riders last took to the track in a formal motorsports event, but competitors are returning to action this weekend. The series moves on to Houston, Texas, for the 13th round of the year.

Ryan Villopoto will be riding a huge wave of momentum into the event. He won his fourth consecutive race in Toronto two weeks ago, and the Kawasaki rider is aiming to continue his dominating stretch at Houston's Reliant Stadium. Villopoto won the race at this venue last year, and that, coupled with his recent string of victories, makes him the favorite heading into the weekend.

He'll be strongly challenged by Davi Millsaps and Ryan Dungey, who have been nipping at his heels all season. Millsaps has cooled off since his hot start but still is only 12 points behind Villopoto for the lead in the standings. Dungey, who has been consistently competitive throughout the season, trails by 22 points, good enough for third place.

Fans should also keep an eye on Trey Canard and James Stewart, both of whom have had solid years so far in 2013 and have won in Houston in the past, Ultimate Motorcycling reports.