Get Ready For MotoGP's Return To The Track 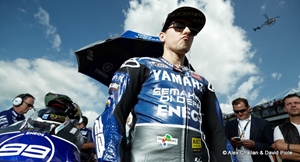 After months of team changes, retirements and testing sessions, real MotoGP racing is finally returning to the world of motorsports.

All eyes will be on Jorge Lorenzo and Dani Pedrosa, the two top finishers from last year's season. Spectators shouldn't look past newcomer Marc Marquez or veterans Cal Crutchlow and Valentino Rossi, as all have performed well throughout the preseason and will be looking to make an impression when the 2013 MotoGP calendar begins.

"After a long testing period I am now really ready to go racing," said Pedrosa. "The team has worked hard to get us in the best place for the start of the season, and I'm pleased with my physical situation ... It will be interesting to see how the new qualifying format works and [I'm] really looking forward to the race. I'm just excited to get the season started."

Pedrosa will have to compete against his rival Lorenzo, the reigning champion who barely hung on to claim the 2012 title. Anything can happen in this fresh season, so fans will have to be ready when the action kicks off April 4 to 7 at the Losail International Circuit in Qatar.