Chaparral Motorsports
|
March 28, 2013
The Beta Factory Rider Will Be Riding The New 300 Two-Stroke 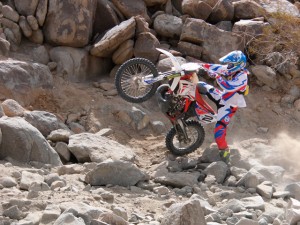 Cody Webb finished second in the 2012 GEICO AMA EnduroCross Championship, Fueled by Monster Energy and served noticed that he is likely the biggest threat to Taddy Blazusiak's domination of the motorsport. Webb is not content to finish second again so he made a few critical changes to his program for 2013, including switching from the Beta 350 four-stroke to the new 300 RR two-stroke. He had a breakthrough win over Graham Jarvis at the King of the Motos to prove that he is indeed ready to compete with the World's best Extreme off-road racers.

"I can't wait to see what 2013 brings. I've been working really hard on the new Beta 300 RR two-stroke and I think it's the key to winning my first EnduroCross event." said Webb. With the backing of the Stillwell Performance Beta team, he is a good bet to be in contention for wins.

Do you want to see if Webb can take down Taddy Blazusiak in 2013? Then you need to plan to be in Las Vegas on Friday, May 3rd during the Monster Energy AMA Supercross finals weekend in Las Vegas. You can get tickets at the Orleans Arena Box office: http://www.orleansarena.com/event-calendar/geico-endurocross-summer-2013