MotoGP Brings Testing To The Americas 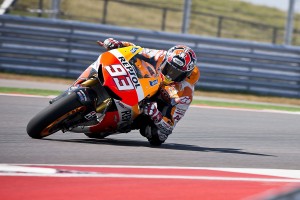 Marc Marquez has consistently been near the top of the timesheets so far throughout the testing period, but he finally clocked the fastest time on day one in Austin.[/caption]

Riders in MotoGP are gearing up for the start of the motorsports season, and many competitors continue to inch toward the beginning with another round of official testing. This time the preparation brought the series to Austin, Texas, and the Circuit of the Americas, marking the first time most of the riders experienced the new track. At the end of day one, Honda's factory team riders emerged as the ones to beat.

Marc Marquez has consistently been near the top of the timesheets so far throughout the testing period, but he finally clocked the fastest time on day one in Austin. The Honda rider finished nearly a half-second ahead of teammate Dani Pedrosa, and the two outpaced major rivals like Yamaha's Jorge Lorenzo and Valentino Rossi.

"The first day in Austin went pretty well," Marquez said. "It is a fun circuit, because there's not a single bump on the track ... Tomorrow we will start to adapt the gearing and the electronics, as we have a lot of work ahead of us."

Testing is set to continue for the next two days. The majority of teams will likely be focusing on fine tuning electronics and other sport bike gear details as they prepare for the start of the season.