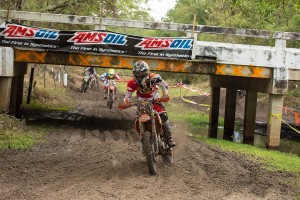 When the flag flew, it was Charlie Mullins who captured the first win of the season - Photo: Shan Moore[/caption]

Factory FMF/KTM Team riders Charlie Mullins and Kailub Russell finished 1st and 2nd respectively at the opening round of the GNCC Series at the Westgate River Ranch Resort.

The normally sandy and dusty course was greeted with rain during the morning race which helped improve the riding conditions dramatically for the start of the pro race. Both Mullins and Russell had a decent start and immediately worked their way into the top five.

Partway into the first lap Russell had moved into 3rd place while Mullins was one more position back in 4th. The two teammates would stay close throughout the 3-hour race continuously pushing each other to the front of the pack.

On the second lap, Mullins took over the lead while Russell began to pressure Paul Whibley to move into 2nd. The next lap Mullins continued to lead while Russell had moved into 2nd and was a bike length behind. For the remainder of the race, the two KTM teammates battled for the lead. With one lap to go it was Russell who was leading Mullins. When they got to the long straight of sand whoops Mullins was able to make a pass on his teammate and took over the lead. Russell remained close to Mullins all the way to the checkers but was unable to pass his teammate back. When the flag flew, it was Mullins who captured the first win of the season with Russell in tow to put both Factory FMF/KTM riders on the podium. 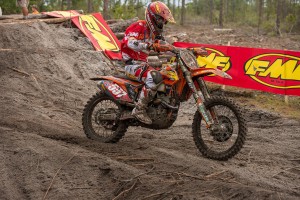 Kailub Russell finished 2nd at the opening round of the GNCC Series - Photo: Shan Moore[/caption]

"It feels really good to get a win here," commented Mullins. "My team and I have been working really hard during the off season and I already had a couple races this year where I finished well which helped my confidence heading to this race. I am very happy to leave the first round with the points lead."

Russell was equally happy with his finish, stating, "The last two years I haven't even finished this race so to get on the podium today almost feels like a win. I am glad to have 25 points heading into the next round." 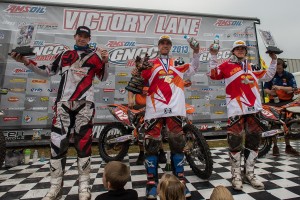