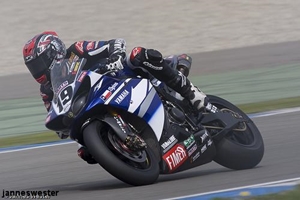 The World Superbike season has barely begun and a top rider has already hit a speed bump. BMW competitor Marco Melandri, who was one of the preseason favorites to win the motorsports title after finishing third overall last year, recently underwent surgery on his right shoulder.

The pain had been nagging the Italian throughout the winter break and was aggravated by a crash with Ducati racer Carlos Checa during the opening round at Phillip Island, Australia. Once the race was complete, Melandri headed home to Italy to receive further medical attention, and doctors then addressed the adhesions and arthritis in his shoulder, Ultimate Motorcycling reports.

"I am very happy," Melandri said. "The examinations showed that there is no injury to the shoulder but that the pain only had a small cause ... With the surgery, they have solved the problems which have been causing me pain."

If all goes well, Melandri believes he will start rehabilitating this week and should be ready to resume training in mid-March. He aims to be ready to race in time for the second round of World Superbike at Aragon April 14.