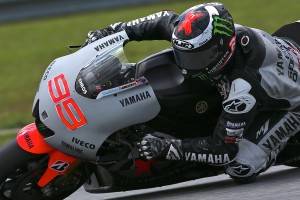 The second day of MotoGP testing in Malaysia has come and gone, and after all was said and done a familiar face was on top of the motorsports timesheets. Defending champion Jorge Lorenzo shaved almost a second and a half off rival Dani Pedrosa's best time from the opening round of testing the day before and managed to end day two with the best time.

"A pretty good day, the track was much better than yesterday..." Lorenzo said. "We improved the setting on the bike and I feel stronger than the first Sepang test, so I'm quite satisfied. Tomorrow, if the weather is good, I would like to try a long run of maybe 24 laps to see what happens with the tires."

While Pedrosa put up the fastest time on the third day, Lorenzo's strong performances landed him in the number one spot for the entire testing period. Marc Marquez, Cal Crutchlow and Valentino Rossi all finished in the top five spots as well.

Teams now move to Austin, Texas, before traveling to Jerez, Spain, where the final rounds of testing will take place in March.