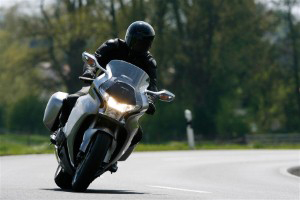 The sponsor of a California Senate bill that would have restricted the current practice of lane-splitting by motorcyclists will withdraw the bill from consideration, the American Motorcyclist Association reports.

Lane-splitting by motorcyclists in California is recognized by the California Highway Patrol and helps ease traffic flow.

An aide to state Sen. Jim Beall (D-San Jose), who sponsored S.B. 350, confirmed in an email to the AMA Tuesday afternoon that the bill would be withdrawn, pending the results of a University of California-Berkeley safety study expected later this year. The bill, introduced Feb. 20, would have allowed lane-splitting only in certain instances: on divided highways with three or more lanes of travel in the same direction, only when traffic is congested and only at "a safe" speed.

Nick Haris, AMA western states representative, noted that lane-splitting has been an accepted custom and necessary strategy to ease traffic congestion in California for years. He noted that Beall's bill proposed a sudden and significant shift in traffic management strategies in the state with respect to motorcycles, which could have had a serious impact on traffic flow.

"We are pleased that Sen. Beall's office is withdrawing the bill, but we remain watchful of any legislative action on lane-splitting that could penalize motorcyclists," Haris said. "Lane-splitting has been done safely in California for decades, so there is really no need to impose new restrictions, especially given the guidelines just released by the California Highway Patrol that make no mention of a three-lane minimum."

According to the California Highway Patrol, lane-splitting occurs when a motorcyclist rides between lanes of stopped or slower-moving traffic or moves between lanes to the front of stopped traffic. The convention is recognized as a benefit to urban traffic flow because it allows motorcycles to make maximum use of roadways when traffic is stopped or significantly slowed. The controlled flow of motorcyclists through stopped traffic also permits more space for other road users.