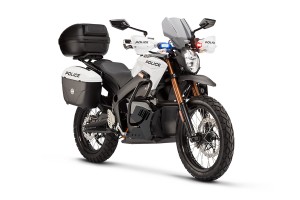 The 2013 models boast 93 percent more power and 62 percent more torque, and they have a 10 percent greater range than their 2012 counterparts.[/caption]

Zero Motorcycles is known for its electric bikes, but its latest offerings are bringing a new level of safety to the streets. In 2013, the manufacturer will be providing a new lineup of Police and Security machines - both the S and DS will be available for the police.

Developed specifically with security workers in mind, the DS police line of motorcycles launched in 2012 with great success. Auto Evolution reports that this is the fastest growing segment for Zero Motorcycles, and the line is helping the company while also assisting law enforcement.

"After seeing the success the 2012 model had in the field, we decided to expand our 2013 police and security offerings," said John Llyon, vice president of sales for Zero Motorcycles. "... Police officers put their lives on the line every day to protect and serve, so it's imperative we give them all the tools necessary to be successful. The 2013 Police and Security lineup does that exceptionally well."

The 2013 models boast 93 percent more power and 62 percent more torque, and they have a 10 percent greater range than their 2012 counterparts. They will also have updated motorcycle accessories to keep riders safe on the roads, including emergency lighting gear, detachable windscreens, heated seats and grips, hand guards and more.