Everything Roger: DeCoster Extends Contract To 2016! 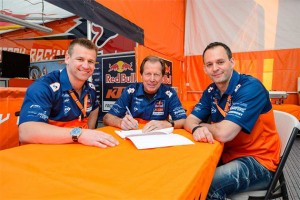 Even though Roger DeCoster, Team Manager of the Red Bull KTM Factory Teams in the USA, had a valid contract through to the end of the year, the course for the future was settled a few days ago when his cooperation with the factory team was extended to 2016!

Pit Beirer, Head of KTM Motorsport engaged Roger DeCoster, five-times Motocross World Champion from Belgium in 2011 to manage the company's US factory team. One year later DeCoster brought his protÃ©gÃ© Ryan Dungey into the Red Bull KTM lineup. The team celebrated its first victory, and KTM's first in the big class of the Supercross World Championships in the second race of the season at Phoenix. The year concluded with an impressive performance and title victory by Dungey in the US Motocross Championship.

Pit Beirer (KTM Head of Motorsports): "Roger had a valid contract from KTM but it was the wish on both sides to extend it before it was due to secure stability in the coming years. The contracts with all other team members were also extended as well as new infrastructure, workshops and team truck." 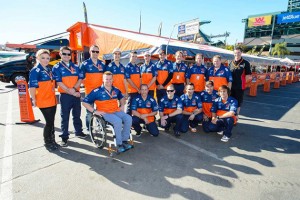 Contracts with all other teammates also renewed, as well as new infrastructure, workshop and team truck.[/caption]

Roger DeCoster (Red Bull KTM Factory Team Manager): "The job continues to be fun for me and to work with KTM is very refreshing. It's easy to get things done, decisions are made quickly and I can have a lot of influence on the team and the bike. It is our goal to fight for the title in both Supercross and Motocross - ideally in the future also with two factory riders per class."

The name Roger DeCoster stands for the sport of Motocross and his nickname "The Man" is no coincidence. He made a huge influence with his smooth and controlled riding style and his dedication to very hard training at the height of his racing career. He established himself as one of the best motocross riders of all time with his five World Championship titles. DeCoster went on to end his racing career in the Grand Prix of Luxemburg 1980 with his usual victory. 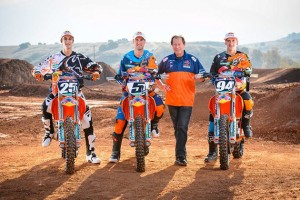 After this, DeCoster spent a lot of time in the USA and proved to be just as successful as a team manager as he was in his active career. KTM is proud that a legend of the quality of Roger DeCoster has become part of the KTM family!