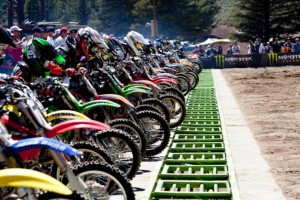 Over the past 45 years, The Mammoth Motocross has built one of the most successful motocross racing programs in the western United States.[/caption]

Over the past 45 years, The Mammoth Motocross has built one of the most successful motocross racing programs in the western United States. For 2013, the popular venue joins the AMA amateur motocross schedule and will feature the AMA King of the West title.

"We're excited to partner with such a well-established and professional promoter," said AMA Vice President of Operations Jeff Massey. "AMA-sanctioned events are the gold standard for motorcycle and ATV competition and recreation in the United States, and we're looking forward to working with The Mammoth Motocross to enhance an already excellent program and contribute to showcasing and boosting the prestige of the outstanding athletes who call this series home."

The six-race "Road to Mammoth" qualifier series includes races in Hesperia, Calif.; Porterville, Calif.; Turlock, Calif.; Riverside, Calif.; Reno, Nev.; and Perris, Calif. Racers' four best finishes in the qualifiers will earn points toward the AMA King of the West title. Riders who win the AMA King of the West title in their class will receive first gate pick at the Mammoth Motocross finale.

"We're very excited to join the ranks of AMA-chartered promoters and to do our part to support the country's leading advocate for the right to ride and race," said Mammoth Motocross Race Director Mike Colbert. "In addition, we were at the point where we needed help keeping track of today's fastest amateur riders. An AMA sanction allows us to do that as well as take advantage of the AMA Amateur Competition Rulebook and align some of our rules to make them more consistent with today's classes, but while retaining key elements that make motocross racing at Mammoth unique."

For additional event info, detailed schedules, rules and information about AMA membership and racer license options available for the series, riders should go to www.mammothmotocross.com or www.2xpromotions.com.