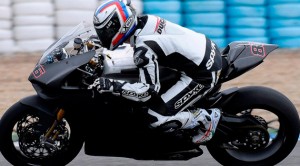 The Alstare Ducati team was able to try out some new designs, but it was only able to test a small portion of what it had initially scheduled.[/caption]

Teams from MotoGP and World Superbike were ready to attack days of motorsports testing at the Jerez track in Spain, but rainy conditions washed out almost all of the planned runs. According to Ultimate Motorcycling, the racing ban is still in effect for riders, so most of the work was to focus on new electronic strategies and gear, although a few teams got to complete their tests.

The Alstare Ducati team was able to try out some new designs, but it was only able to test a small portion of what it had initially scheduled. However, Ducati did manage to get some feedback from practice riders on the new 1199 Panigale bikes.

"Unfortunately we had some bad luck with the weather, and for two days we were able to do almost nothing," said Bernard Gomeier, Ducati course general manager. "... Today we squeezed three days of work into about five hours, which obviously required skipping some of the steps we had planned."

Other manufacturers present include Suzuki, BMW, Aprilia and Pata Honda. MotoGP teams won't get a chance to test on a formal track again until the beginning of February when they travel to Malaysia and race on the Sepang track.