Supercross Season Ready To Kick Off In Anaheim 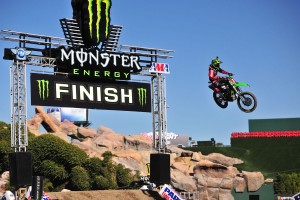 Reigning champion Ryan Villopoto is the favorite heading into the event, as he won both races at Angel Stadium last year - Photo: Steve Cox[/caption]

Monster Energy AMA Supercross will make its triumphant return this weekend when the motorsports series gets underway at Angel Stadium in Anaheim, California.

Reigning champion Ryan Villopoto is the favorite heading into the event, as he won both races at Angel Stadium last year. He'll be challenged by two-time title holders James Stewart and Chad Reed as well as rival Ryan Dungey.

All of the riders understand the importance of the opening race, but they also know that even accumulating solid finishes in Supercross events can be essential to rack up series points - especially considering all of the injuries and unknowns that can come along with the series. According to ESPN, only three of the top 10 riders competed in every event in 2012, and even Villopoto didn't finish the season.

"It's going to take speed, but it's probably going to be about consistency more than anything," Stewart told Ultimate Motorcycling. "There are a lot of fast guys out there, and all of them want to win. None of us will have the luxury of a bad weekend this year."

While this weekend may be just the first of 17 Supercross events - and the first of three in Angel Stadium - the results could set the tone for the season.