MotoGP Wraps Up Testing At Jerez 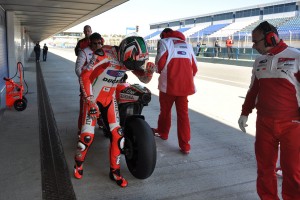 Nicky Hayden impressed team officials with his work during the week.[/caption]

MotoGP riders from BMW and Ducati closed out the final days of winter testing at the Jerez track in Spain. While the three-day test period was marred by rain, many top riders were able to hit the track for one last round of practice before the winter break.

Ducati's Nicky Hayden and Andrea Dovizioso were present at Jerez, as were BMW's Marco Melandri and Chaz Davies. Hayden impressed team officials with his work during the week, as did Melandri, but their teammates struggled to adjust to their new bikes. Dovizioso strained his neck after just three laps and was forced to withdraw from testing, while Davies had to limit his time getting to know the new ride.

"...Once I was happy with the settings of the bike, we went on to test different 2013 parts," said Melandri. "We clearly have an idea of which way to go, as we understand exactly what we need to do. I am looking forward to the winter break now, as I need some rest before I start working out in the gym again and preparing for 2013."

All teams now enter a two-month break from testing, returning for more motorsports at the Sepang International Circuit in Malaysia from February 5 to 7.