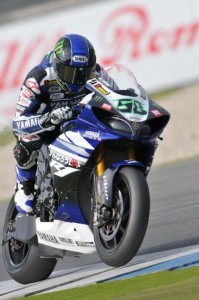 Riders from World Superbike and MotoGP were present for winter testing at Jerez, but it was the superbike teams who stole the show on their final day of motorsports before the break.

BMW's Marco Melandri clocked the fastest time of the day, but was closely followed by Ducati's Carlos Checa. Cold weather prevented either of the riders from challenging the times set in the previous days of testing, Crash.net reports.

Only teams from BMW and Ducati were on the track, as Kawasaki and Aprilia finished up their testing the day before. Kawasaki's Tom Sykes led the first few days of testing, but Aprilia's Eugene Laverty surged ahead on the final day to claim the fastest lap time of the session.

"...It was nice to set the fastest lap so we can go into the winter break in a good mood," said Laverty. "Honestly I didn't expect to go so fast but we made great progress with the front of the bike allowing me to push it more than ever. We're all set for next season."

All teams will have have a mandatory six-week winter break, running until mid-January. The superbike season kicks off on February 26 at Phillip Island, Australia.