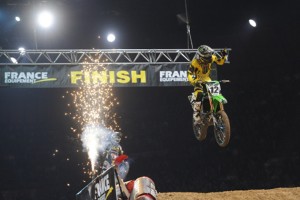 Jake Weimer was named King of Bercy after putting together a consistent string of motorsports performances on the French course - Photo: Olivier Weidemann[/caption]

The 30th edition of the three-day Bercy Supercross came down to the final few laps, as Kawasaki's Jake Weimer held on to win the overall event title over Honda's Eli Tomac.

Weimer was named King of Bercy after putting together a consistent string of motorsports performances on the French course. Despite winning the events on the first two nights, the Kawasaki rider still needed to have a strong finish in the final race. He appeared in control before crashing with four laps to go. He quickly rebounded and maneuvered his way from third to second in the penultimate lap, clinching the overall victory.

"The three nights here are nerve-wracking," Weimer told Cycle News. "I knew I needed to do well on the first night to have a chance to win. Then on the second you want to continue the roll, but coming to the third night I knew only I could blow it... It is amazing to be able to get on the plane tomorrow knowing I have this achievement chalked off."

Weimer led an American sweep of the podium, with Tomac taking second place and Justin Brayton finishing in third.