Max Biaggi Is The Big Winner At Caschi D'Oro Awards 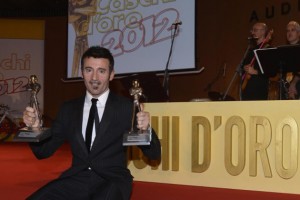 Max Biaggi emerged as the big winner at the Caschi d'Oro awards ceremony in Italy.[/caption]

Max Biaggi emerged as the big winner at the Caschi d'Oro awards ceremony in Italy. Held at the EICMA Show in Milan and organized by the Italian magazine Motosprint, the event, also known as the Golden Helmets, recognizes individuals in motorsports for their achievements.

Biaggi took home the two biggest awards of the evening, one for the best season for his championship campaign on the World Superbike circuit and the other for top rider, according to Ultimate Motorcycling. For the latter award, Biaggi beat out Motocross World Champion Tony Cairoli and MotoGP titleholder Jorge Lorenzo. It was the sixth time Biaggi, who announced his retirement several weeks ago, has won the top rider award.

"It's been 20 years and it was difficult to get here," Biaggi told Two Wheels Blog. "Tonight I was almost tempted not to come; it's hard to think that it ends here."

Superbike dominated most of the other awards handed out, with the manufacturer's award going to Aprilia, Biaggi's factory team, and Marco Melandri, who finished third in the past World Superbike season, also taking home a prize. MotoGP's Andrea Dovizioso and Moto2's Andrea Iannone took home awards in recognition of their strong years.