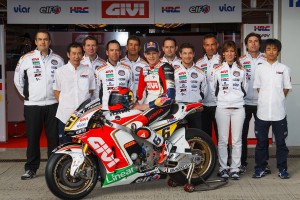 German racer Stefan Bradl won the Rookie of the Year award at MotoGP's FIM Awards Ceremony. The 22-year-old finished in ninth place or better in every race this season, adapting quickly to his new team and machine at LCR Honda. He ended the motorsports season eighth overall in the points standings and with a personal best fourth place finish at the Mugello Grand Prix.

"Honestly I was not expecting to be awarded as the best rookie of this class, and this makes me very happy and satisfied because I think that everybody in the team made a great job this season," Bradl said. "Nonetheless I must thank...the whole crew for their efforts and their passion, and I am looking forward to be on track with all of them next year."

Winning Rookie of the Year wasn't the only good news for Bradl this week. He also signed a new deal with the LCR Honda team, guaranteeing his position as a factory rider through the 2014 season. LCR Honda hasn't had a rider land on the MotoGP podium since 2009, but they hope Bradl, with the help of factory-spec bike and sport bike gear, will be the one to break that streak.