Day Two Of Testing In The Books In Spain 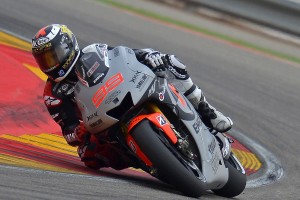 "For sure these last two days we've been unlucky with the weather and couldn't practice for many laps," said Jorge Lorenzo, the newly crowned MotoGP champion.[/caption]

Rain put on a damper on the second day of MotoGP testing in Valencia, Spain, keeping many of the motorsports riders sidelined for most of the day. A dry line developed in the late afternoon, Ultimate Motorcycling reports, allowing most racers to use prototype machines on the final day of racing.

Dani Pedrosa clocked the fastest time of the day, closely followed by Cal Crutchlow, Stefan Bradl and Nicky Hayden. For many of the riders, this was the first opportunity to test the 2013 prototypes of highly anticipated bikes like the Ducati Panigale 1199.

The Yamaha team moved from Valencia to the nearby circuit in Aragon, hoping to find better weather to get testing in before the winter break. They ran into the same inclement weather, however, and only managed to get in a partial day of riding.

"For sure these last two days we've been unlucky with the weather and couldn't practice for many laps," said Jorge Lorenzo, the newly crowned MotoGP champion. "It was important to get practice here...so we can give as much information as possible to the engineers so they can keep working over the winter."

The next round of testing will take place in Sepang, Japan, at the end of November.