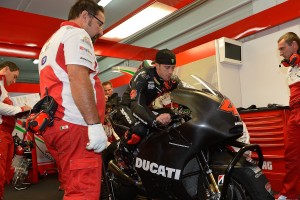 "I'm happy after my first day, mainly because I have a good feeling with my crew and I had a good lap time in the wet." - Andrea Dovizioso[/caption]

The MotoGP season only just ended, but manufacturers and riders have already begun testing for the 2013 motorsports season.

Several riders made their debuts for new factory teams, including Valentino Rossi for Yamaha and Andrea Dovizioso for Ducati. Many were eager to try out the 2013 prototypes, although a few teams chose to use current bikes for testing instead of debuting the new models in less than ideal wet conditions.

"I'm happy after my first day, mainly because I have a good feeling with my crew and I had a good lap time in the wet, even compared to wet times over the weekend," said Dovizioso. "The conditions weren't ideal for a debut on a new motorcycle, but anyway, it was important for me to do some kilometers on the bike."

Alvaro Bautista had the fastest time of the day, with his laps coming mostly on a dry track earlier in the morning. He was followed by Dovizioso, as well as veteran rider Loris Capirossi and Stefan Bradl. The fastest runs came primarily from the early morning tests, with times slowing down as the day progressed and conditions worsened.