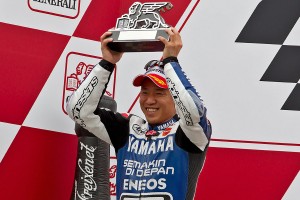 Katsuyuki Nakasuga, who was racing in place of the injured Ben Spies, completed an improbable surge from the middle of the pack to claim second place.[/caption]

The finale of MotoGP saw a familiar face on top of the podium, but it was a motorsports newcomer who stole the show. Katsuyuki Nakasuga, who was racing in place of the injured Ben Spies, completed an improbable surge from the middle of the pack to claim second place, behind Dani Pedrosa.

"I'm so very happy with this result, the conditions were very difficult today," said Nakasuga. "It is like a dream or a miracle for me to be on the podium as the qualifying was not so good. I want to thank Yamaha for giving me this special opportunity to race here in MotoGP, it has been amazing."

Wet conditions at the start of the race forced riders to make a decision regarding which motorcycle tires to use. At the last minute, Pedrosa chose to switch to slicks, causing him to have a delayed start from the pit. The Spaniard didn't let that hold him back for long, capitalizing on a crash from overall champion Jorge Lorenzo and moving into the lead. He stayed in the top position for his seventh win of the season, the most of any racer this year.

Casey Stoner took the last podium spot in the final MotoGP race of his career, finishing more than 20 seconds behind Nakasuga.